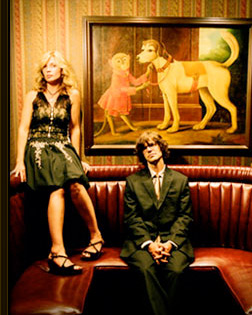 After more than 15 years making music, it’s obvious Ohio duo Over The Rhine is in it for the long haul, and for keeps. Their commitment is underscored by their latest, The Trumpet Child, and its opening track, “I Don’t Wanna Waste Your Time,” a manifesto of sorts for the artists recently named to Paste magazine’s list of 100 Best Living Songwriters. Look no further than the lyrics to this track for what animates Linford Detweiler and Karin Bergquist, the married couple at the heart of Over The Rhine: “I hope this night puts down deep roots / I hope we plant a seed / ‘Cause I don’t wanna waste your time / With music you don’t need.”

“Believe me, we don’t want to waste anybody’s time,” elaborates Detweiler. “When we stop believing we’re doing our best work, we’re done. Every song has to be good, every record has to be great, every concert has to have some spiritual significance—something that we can’t quantify, something bigger than all of us.”

Over The Rhine may not be a household name, but to call the act’s followers “fanatical” would understate the point, and they’re not shy about converting the curious. Why? For starters, there’s Bergquist’s torchy, devil-may-care voice, brimming with Midwestern soul, unafraid to lay bare every emotional resonance. And again, there’s the life-and-death commitment dripping from her every word. “I’m either into it or I’m not, because there’s no faking it with me,” Bergquist notes. “Life’s way too short for that.”

Detweiler and Bergquist’s evocative, earthy songwriting and impassioned delivery is at its finest in The Trumpet Child. The new record is a collaboration with ultra-talented Nashville producer/arranger Brad Jones (Matthew Sweet, Josh Rouse, Ron Sexsmith, Richard Julian, et. al) and celebrates American music in the most richly imaginative ways.

“We love a good song, period,” Detweiler notes. “ It could be an old country tune Patsy Cline is singing on an old jukebox in one of our favorite Kentucky dives; it could be Lightnin’ Hopkins grumbling over a timeless blues riff; it could be Sachmo, the dignity of his voice and the joy in his horn; it could be Tom Waits kicking up the dust on the hardwood floor of a grange hall at some imaginary revival meeting—it can be all over the map musically—but what ultimately keeps us interested is the mystery of the song itself.”

Such a wide-ranging approach met its best match in Jones, who collaborated with the band on arrangements and scoured Nashville’s broken-bottle-strewn back alleyways for an arresting array of horn, woodwind and string players to festoon the trademark simplicity of Over the Rhine. The result is a juicy, informally epic pop album unlike any other you’re likely to hear this year.

“I first heard Brad’s bass playing on records Mitchell Froom was producing—Ron Sexsmith’s Whereabouts is a great example—and I kept thinking to myself, ‘This bass player is better than Paul McCartney,’” Detweiler recalls. “I think we knew we were on to something special when we saw Brad sketch out the instrumental arrangement on ‘Nothing is Innocent’—he heard that alto flute and those strings in his head before anyone played a note. Brad’s a bit of a mad scientist, and a very special musician.”

The Trumpet Child unfolds like an unforgettable evening of blissful underground cabaret—an all-night performance at a private party, jovial friends passing around instruments together into the wee hours. And it’s unquestionably Bergquist’s finest hour vocally. “On earlier records, I was unintentionally playing it a bit safe at times,” she says. “I had all this stuff bottled up and I was afraid that if I let it out, even musically, I’d be laughed at or, God forbid, misunderstood. Now, I’m more lost in it. More drunk on it. Far more out of control about it. Messy, juicy and tangled up.”

Over The Rhine began in 1990 as a more conventional four-piece rock band, albeit one far more in tune with the nuances of songcraft than its three-chord, grunge-era contemporaries. “I was continuing my education, considering my masters degree, when this tall, lanky fella approached me about singing lead for some rock band in Cincinnati,” recalls the classically trained Bergquist. “I didn’t just jump at the chance. I lunged.”

Adopting the name of the gritty neighborhood Over-The-Rhine, where the foursome found fertile soil, the group quickly became a local sensation and graduated from sold-out weekend club dates to opening tours for Adrian Belew and Bob Dylan. Two lavishly packaged independent records later, the young group signed to IRS, which re-released second record Patience with its original artwork, a first for the label (and a tribute to the vision and attention to detail which has always marked the band).

Seeking artistic autonomy, the band returned to independence for Good Dog Bad Dog, a collection of glorified demos and home recordings that nonetheless eventually outsold the band’s three previous IRS releases combined and knit the band tightly to its fanbase, which, by then, had come to hang on the group’s every move. (A collection of recordings—live, and otherwise—offered exclusively to fans bears witness to the band’s ardent, enduring cult.)

The next few years found the band pared to its core duo of Detweiler and Bergquist, as the two locked arms with likeminded fellow travelers Cowboy Junkies, touring as “honorary members” of the group, and released their Virgin/Backporch debut, Films For Radio. Next came Over The Rhine’s magnum opus, the double album Ohio, “a deeply moving, maddening, and redemptive work of art, and necessary, ambitious pop,” as All Music Guide’s Thom Jurek put it in a 4.5-star review. The intimate, living-room record Drunkard’s Prayer followed—recorded, literally, in the duo’s Cincinnati living room—as the sound continued to expand beyond rock to encompass elements of country and jazz, punctuated by Drunkard’s Prayer’s final track, a moody, late-night reading of “My Funny Valentine.”

So it’s fitting that the first sound the listener hears on The Trumpet Child is that of a brass-and-woodwind ensemble, arranged by Detweiler like some lost Southern hymn. “We had been stunned by the whole Katrina debacle in New Orleans, and that was a big part of why we wanted horns and clarinets to be blowing through this music,” notes Detweiler.

And what of the title track? Who is this “trumpet child,” anyway? Detweiler explains: “Both Karin and I grew up around a lot of old church music. I think some of the old hymns taught us that words could be beautiful, with their titles like ‘Softly and Tenderly,’ ‘When the Roll Is Called Up Yonder,’ and ‘Let the Lower Lights Be Burning.’ A theme that recurred in a lot of the old hymns was the idea that the world would be reborn with the sound of a trumpet. We’ve all heard many of the great American trumpet (and horn) players—Louis Armstrong, Miles Davis, John Coltrane, Stan Getz—and we’ve been wondering about the sound of that trumpet. Is it real? Is it a metaphor? What, exactly, is on God’s iPod?”

Appropriately, the song is embellished by a lush, aching, muted trumpet, played by Neil Rosengarden, who was an ace in the hole for Jones and the band, despite first impressions. “Neil came in walking with a cane, asked for a glass of water, dumped a cocktail of pain meds into his palm—down the hatch!—went and took a nice long smoke, then listened to the song,” Detweiler recalls. “But he played some great tidbits—heartbroken, simple, heart-still-beating-in-spite-of-it-all riffs.”

In terms of The Trumpet Child’s themes, Detweiler says, “On this project, I think we returned to the quintessential stuff that’s always interested us in our writing: spirituality, sexuality, living vividly, challenging the status quo and subtly taking power away from those who have too much and transferring it to people who have too little.”

Encouragement can come from many sources, and for Over The Rhine, a vote of confidence from Dave Foreman, their sound engineer, has put fire in their bellies. Foreman, a childhood friend of John Hiatt’s from Indiana who’s served many great songwriters on the road, came out of retirement—and the baggage of a heroin addiction that landed him in Cincinnati to clean up and start a family—to tour with the band.

“We ran into Dave at a concert in Kentucky a few years ago and got to talking about the possibility of him coming out of retirement to tour with Over the Rhine as our sound engineer,” Detweiler says. “Part of our conversation consisted of Dave saying, ‘The thing is, I don’t want to leave my wife Sharon behind; I don’t want to leave my daughter Emmy behind and go back out on the great American highway—unless we’re going to go deep.’”

Go deep? That’s the only place Over The Rhine has ever gone.