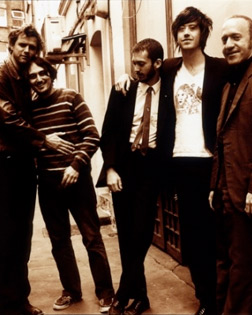 Okkervil River began as a mutual project of Will Sheff (vocals, guitar), and Seth Warren (guitar). They met and collaborated together when both were still in high school in Meriden, NH. After relocating to Austin, TX in the late 90’s, the duo decided to re-assemble the band with the addition of Zachary Thomas (vocals, bass), Jonathan Meiburg (vocals, banjo), and drummer Travis Nelsen. In 1998, the group self-released their first disc, the “Bedroom” (EP), followed a year later with their debut album “Stars Too Small to Use”. During the succeeding years, the band regularly played live on numerous occasions, including an appearance at the South by Southwest festival in 2000. The group’s second album, Don’t Fall in Love With Everyone You See, showed up in 2002, re-affirming the band’s cult following all over the Texas music scene. Since that time, Okkervil River has released a few more full-length albums and several EPs. On April 17, 2006, Okkervil River signed with Virgin/EMI in Europe. On August 7, 2007, the band released their fifth full-length, entitled “The Stage Names,” released, again, on Jagjaguwar. Pitchfork identified the album as “Okkervil River’s most emotionally devastating record yet, and without doubt one of the year’s best.”